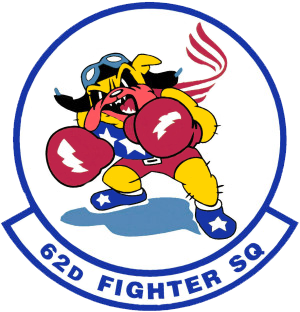 The 62d Fighter Squadron was activated as the 62d Pursuit Squadron, one of the original three squadrons of the 56th Pursuit Group at Army Air Base Savannah, Georgia, on 15 January 1941. The squadron immediately began training for its wartime missions under III Fighter Command, rapidly transitioning through the Seversky P-35, Curtiss P-36, Bell P-39 Airacobra, and Curtiss P-40 Warhawk aircraft. On 7 December 1941, the 62d stepped up to defend the Northeastern United States from anticipated enemy air attack while it converted to the Republic P-47 Thunderbolt and prepared to deploy overseas, operating under the I Fighter Command, New York Fighter Wing in the early months of 1942.

It was redesignated 62d Fighter Squadron on 15 May 1942, and deployed to RAF Kings Cliffe, England on 9 January 1943. It was declared operationally ready two months later and flew its first combat missions 13 April. The squadron was given fuselage code “LM” and operated from several RAF stations during the war, flying the P-47 Thunderbolt as an VIII Fighter Command bomber-escort unit for Boeing B-17 Flying Fortresses and beginning in 1944 for Consolidated B-24 Liberators attacking enemy targets in Occupied Europe. After the end of the war in Europe, the squadron was inactivated on 18 October 1945.