The Ghost Army was a United States Army tactical deception unit during World War II officially known as the 23rd Headquarters Special Troops. The 1100 man unit was given a unique mission within the Allied Army: to impersonate other Allied Army units to deceive the enemy. From a few months after D-Day, when they landed in France, until the end of the war, they put on a “traveling road show” utilizing inflatable tanks, sound trucks, fake radio transmissions, scripts and pretence. They staged more than 20 battlefield deceptions, often operating very close to the front lines. Their story was kept secret for more than 40 years after the war, and elements of it remain classified. The unit was the subject of a PBS documentary The Ghost Army in 2013.

The visual deception arm of the Ghost Army was the 603rd Camouflage Engineers. It was equipped with inflatable tanks, cannons, jeeps, trucks, and airplanes that the men would inflate with air compressors, and then camouflage imperfectly so that enemy aerial reconnaissance could see them. They could create dummy airfields, troop bivouacs (complete with fake laundry hanging out on clotheslines), motor pools, artillery batteries, and tank formations in a few hours. Many of the men in this unit were artists, recruited from New York and Philadelphia art schools. Their unit became an incubator for young artists who sketched and painted their way through Europe. Several of these soldier-artists went on to have a major impact on art in the post-war US. Bill Blass, Ellsworth Kelly, wildlife artist Arthur Singer, and Art Kane were among the many artists who served in the 603rd.

The 3132 Signal Service Company Special handled sonic deception. The unit coalesced under the direction of Colonel Hilton Railey, a colorful figure who, before the war, had “discovered” Amelia Earhart and sent her on her road to fame. 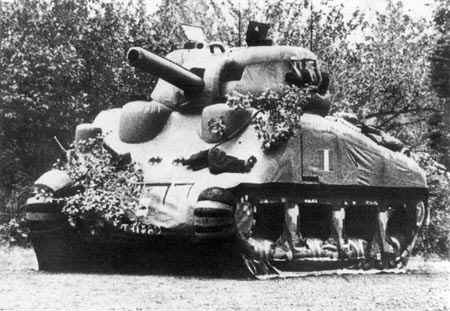 Aided by engineers from Bell Labs, a team from the 3132 went to Fort Knox to record sounds of armored and infantry units onto a series of sound effects records that they brought to Europe. For each deception, sounds could be “mixed” to match the scenario they wanted the enemy to believe. This program was recorded on state-of-the-art wire recorders (the predecessor to the tape recorder), and then played back with powerful amplifiers and speakers mounted on halftracks. The sounds they played could be heard 15 miles (24 km) away.

To complement existing techniques, the unit often employed theatrical effects to supplement the other deceptions. Collectively called “atmosphere”, these included simulating actual units deployed elsewhere by the application of their divisional insignia, painting appropriate unit insignia on vehicles and having the individual companies deployed as if they were regimental headquarters units. Trucks/Lorries would be driven in looping convoys with just two troops in the seats near the rear, to simulate a truck full of motorized infantry under the canvas cover. “MPs” (military police) would be deployed at cross roads wearing appropriate divisional insignia and some officers would simulate divisional generals and staff officers visiting towns where enemy agents were likely to see them. A few actual tanks and artillery pieces were occasionally assigned to the unit to make the “dummies” in the distance appear more realistic.