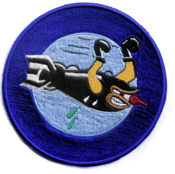 The 703d Bombardment Squadron was activated 1 April 1943 at Gowen Field in Idaho, where initial organization took place while key personnel traveled to Orlando AAB, Florida for training with the Army Air Forces School of Applied Tactics. Both elements met at Wendover Army Air Field, Utah on 8 June 1943, where initial training with the Consolidated B-24 Liberator took place. The squadron moved to Sioux City Army Air Base, Iowa in July 1943 to complete training. At Sioux City, Iowa, actor Jimmy Stewart was assigned as the squadron’s operations officer. Capt Stewart then became the squadron commander. In September the squadron began to receive B-24H aircraft, the model of the Liberator they would fly in combat.

On 20 October 1943 the ground echelon moved to Camp Shanks, New York and embarked on the RMS Queen Mary on 26 October 1943, sailing next day. The unit arrived in the Firth of Clyde, Scotland on 2 November 1943 and disembarked at Gourock. The air echelon departed Sioux City late in October 1943 and flew to the United Kingdom via the southern route: Florida, Puerto Rico, Brazil, and West Africa. Upon arrival, the squadron was stationed at RAF Tibenham as part of the 2nd Combat Bombardment Wing. The squadron was initially given a fuselage code of RN.

The 703d entered combat on 13 December 1943 by attacking U-boat installations at Kiel.[6] The unit operated primarily as a strategic bombardment organization until the war ended, striking such targets as industries in Osnabrück, synthetic oil plants in Lutzendorf, chemical works in Ludwigshafen, marshalling yards at Hamm, an airfield at Munich, an ammunition plant at Duneberg, underground oil storage facilities at Ehmen, and factories at Münster.

The squadron participated in the Allied campaign against the German aircraft industry during Big Week, from 20 to 25 February 1944, being awarded a Distinguished Unit Citation for attacking a Bf 110 aircraft assembly plant at Gotha on 24 February. This was the longest running continuous air battle of World War II – some two and a half hours of fighter attacks and flak en route and leaving the target area. Bomb damage assessment photographs showed that the plant was knocked out of production indefinitely. 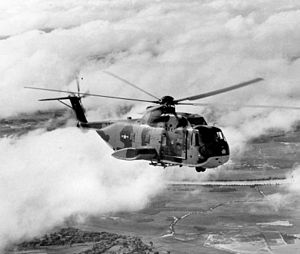 The unit occasionally flew air interdiction and air support missions. It helped to prepare for the invasion of Normandy by bombing airfields, V-1 and V-2 launch sites, and other targets. It attacked shore installations on D-Day, 6 June 1944. and supported ground forces at Saint-Lô by striking enemy defenses in July 1944. During the Battle of the Bulge, between December 1944 and January 1945 it bombed German communications. Early on 24 March 1945 the 703d dropped food, medical supplies, and ammunition to troops that landed near Wesel during the airborne assault across the Rhine and that afternoon flew a bombing mission to the same area, hitting a landing ground at Stormede.

On occasion the unit dropped propaganda leaflets and hauled fuel to France. It was awarded the Croix de guerre with Palm by the French government for operations in the theater from December 1943 to February 1945 supplying the resistance. 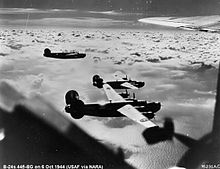 By far, the 703d’s most tragic mission is the attack on Kassel of 27 September 1944. In cloud, the navigator of the lead bomber of the 445th Bombardment Group miscalculated and the 35 planes of the 703d and the other squadrons of the group left the bomber stream of the 2d Air Division and proceeded to Göttingen some 35 miles (56 km) from the primary target. After the bomb run, the group was alone in the skies and was attacked from the rear by an estimated 150 Luftwaffe planes, resulting in the most concentrated air battle in history. The Luftwaffe unit was a Sturmgruppe, a special unit intended to attack bombers by flying in tight formations of up to ten fighters in line abreast. This was intended to break the bomber formation at a single pass. The 361st Fighter Group intervened, preventing complete destruction of the group. Twenty-nine German and 25 American planes went down in a 15-mile (24 km) radius. Only four of the 445th group’s planes made it back to the base – two crashing in France, one in Belgium, another at RAF Old Buckenham. Two landed at RAF Manston. Only one of the 35 attacking aircraft was fit to fly next day.

After the end of the air war in Europe, the 703d flew low level Trolley missions over Germany carrying ground personnel so they could see the result of their efforts during the war. The group’s air echelon departed Tibenham on 17 May 1945, and departed the United Kingdom on 20 May 1945. The 700th ground echelon sailed on the USAT Cristobal from Bristol. The ship arrived at New York on 8 June 1945. Personnel were given 30 days R&R. The squadron reestablished at Fort Dix, New Jersey, with the exception of the air echelon, which had flown to Sioux Falls Army Air Field, South Dakota. Most personnel were discharged or transferred to other units, and only a handful were left when the unit was inactivated on 12 September 1945.